On Friday October 3, Peter Moreira addressed a crowd of over thirty people at the K.C. Irving Centre at Acadia University. The audience consisted of a diverse group of students, professors, researchers, entrepreneurs, and community members. Moreira discussed the impact startups are having on Atlantic Canada, highlighting the growth from year to year in the amount invested in startups as well as the number of startups being funded.

"The amount of jobs created is something that should not go unnoticed," Moreira said. Entrepreneurs from far and wide are beginning to look more seriously at locating their startup in Atlantic Canada, which is bringing worldclass talent and technologies to this area. Investors are also turning their focus to Atlantic Canada for the first time and the emerging startups here on the east coast. Because of this there has been a significant rise in foregin investment. Moreira warns that this is only one direction for economic development, but expresses the importance of the early numbers and success of the startup community in Atlantic Canada. 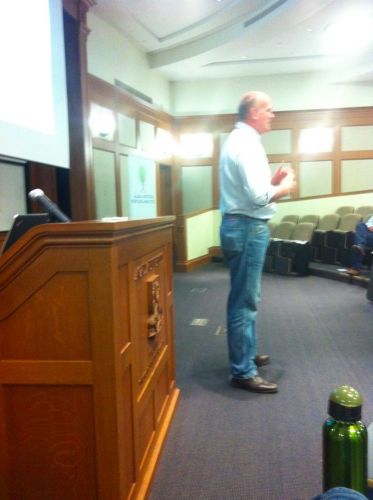 Above: Peter Moreira addressing the crowd at the K.C. Irving Centre